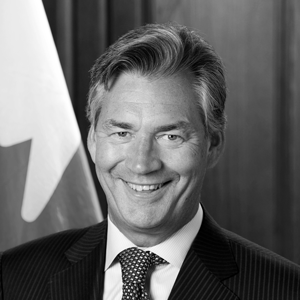 Gary Doer was the 23rd Canadian Ambassador to the United States and former Premier of Manitoba.

Mr. Doer won three consecutive elections as Premier of Manitoba. In 2005, he was named by Business Week magazine as one of the top 20 international leaders on climate change. His government introduced balanced budgets during each of his ten years in office. As Premier, he led strategic investments in health care, education and infrastructure.

Mr. Doer was appointed as Canada’s Ambassador to the United States in 2009. During his six year tenure, he worked with leaders in both Canada and the US at the state and federal level to ensure Canada’s entry into the Trans-Pacific-Partnership and helped to negotiate a presidential permit for the construction of the Detroit-Windsor Bridge. Mr. Doer worked to have hydro-electric power recognized as renewable energy in the US and assisted in ushering in a new cooperative approach to regulatory reform. As Canada’s chief advocate in the US, Mr. Doer garnered support for harmonizing light vehicle emission standards and, as part of the Beyond the Border Action Plan, was directly involved in the signing of the border pre-clearance agreement in 2015, which enables the legitimate flow of trade and travel between Canada and the US.

In 2011, the World Affairs Council awarded Mr. Doer its distinguished diplomatic service award. He is currently volunteering as Co-Chair of the Wilson Centre’s Canada Institute, based in Washington, DC. He hails from Winnipeg, Manitoba and is married with two daughters.