Please enjoy the recording from this event (below) which is hosted on our YouTube channel along with Parag’s PDF presentation slides which you can download by clicking HERE.

In the 60,000 years since people began colonizing the continents, a recurring feature of human civilization has been mobility—the ever-constant search for resources and stability. Seismic global events—wars and genocides, revolutions and pandemics—have only accelerated the process. The map of humanity isn’t settled—not now, not ever.

As climate change tips toward full-blown crisis, economies collapse, governments destabilize, and technology disrupts, we’re entering a new age of mass migrations—one that will scatter both the dispossessed and the well-off. Which areas will people abandon and where will they resettle? Which countries will accept or reject them? As today’s world population, which includes four billion restless youth, votes with their feet, what map of human geography will emerge?

In the book MOVE, celebrated futurist Parag Khanna provides an illuminating and authoritative vision of the next phase of human civilization—one that is both mobile and sustainable. As the book explores, in the years ahead people will move people to where the resources are and technologies will flow to the people who need them, returning us to our nomadic roots while building more secure habitats.

On October 5th we were joined by internationally bestselling author Parag Khanna as he presented insights from his newest book, MOVE: The Forces Uprooting Us, along with potential scenarios and impacts for the bi-national Great Lakes region as more and more citizens and businesses look at the mega-region as a place of refuge and economic growth and revitalization.

Parag Khanna is a leading global strategy advisor, world traveler, and best-selling author. He is Founder & Managing Partner of FutureMap, a data and scenario based strategic advisory firm. Parag’s newest book is MOVE: The Forces Uprooting Us (2021), which was preceded by The Future is Asian: Commerce, Conflict & Culture in the 21st Century (2019). He is author of a trilogy of books on the future of world order beginning with The Second World: Empires and Influence in the New Global Order (2008), followed by How to Run the World: Charting a Course to the Next Renaissance (2011), and concluding with Connectography: Mapping the Future of Global Civilization (2016). He is also the author of Technocracy in America: Rise of the Info-State (2017) and co-author of Hybrid Reality: Thriving in the Emerging Human-Technology Civilization (2012).

Parag was named one of Esquire’s “75 Most Influential People of the 21st Century,” and featured in WIRED magazine’s “Smart List.” He holds a Ph.D. from the London School of Economics, and Bachelors and Masters degrees from the School of Foreign Service at Georgetown University. He has traveled to nearly 150 countries and is a Young Global Leader of the World Economic Forum.

You can learn more about Parag and his very insightful books at: https://www.paragkhanna.com/. 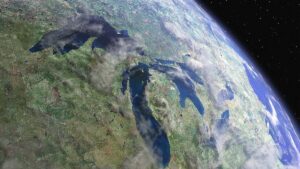